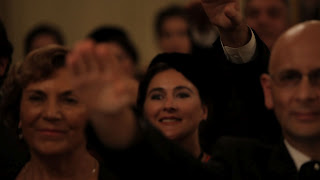 One of the most sensitive scenes of the film "Second Rate Poetry" is the moment when Salazar pronounces his speech at the first literary prizes ceremony awarded by the Secretariat of National Propaganda (S.P.N. - Secretariado de Propaganda Nacional) in February 1935.

The authoritarianism and rigidity of this speech are visually translated into the scene through a static frame and a constant low camera angle. The opulence and grandeur of the set, the high incidence of different sources of light, the imperial roman salute made by an audience full of distinguished people, gave the dictator the centrality of the ceremony, emphasizing his condition of leader.


To know more about the theme and ideas of the Salazar speech, there is an essay by José Barreto that provides a clear perspective and interesting over the subject.