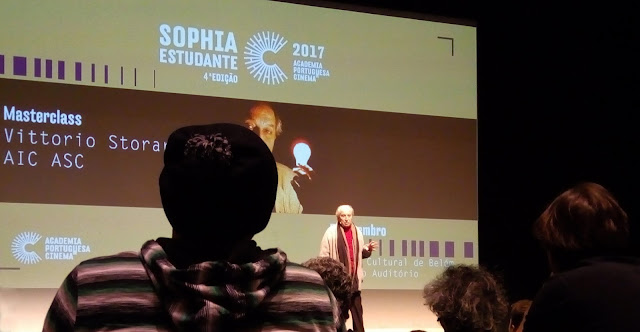 
Instead of being a technical lesson about cameras and film gear, Storaro's masterclass was focused on the relevance of a symbolic and conceptual vision, vital for an artistic work with light. The importance of personal and cultural references was also highlighted, as if such references were a form of spiritual cinematography for life and mind:

"Suddenly I realize to my profession, the meaning of my life is try to find balance between these two: consciousness, unconsciousness, darkness and light." (1)


As an example, Storaro referred how important it was for his personal artistic journey, the apparently casual encounter with the paintings of Caravaggio (1573-1610), or more precisely, one painting: The Calling of Saint Matthew (1599). About this example of cinematic appropriation of older image styles, in this case, from a Baroque painter, we can read in an interview by Giose Gallotti, entitled Baroque Visions (2):

"While I was walking around inside the church, I discovered the Contarelli Chapel, decorated with extraordinary paintings by an artist whose name I didn't know at that time. One, in particular, took my breath away: The Calling of St. Matthew, which I later learned was a work by Caravaggio."


Another interview, by Jon Fauer, entitled The Calling of Vittorio Storaro (3), offers some more details about such an important encounter between two great italian visual artists:

"One day I was with Antonia, my wife, walking in Rome near Piazza Navona and we entered a little church called San Luigi dei Francesi. Inside, I discovered something that I never knew until that moment. On the walls were some canvases by a painter, Michelangelo Merisi da Caravaggio. These paintings filled me with incredible emotions and completely changed my vision. It totally changed my way of seeing. Nobody had mentioned to me there was a Baroque painter called Caravaggio who was using light and shadow to visualize our life’s journey."


During the Lisbon masterclass, Storaro mentioned how this particular painting deeply influenced his work, especially the photography of Francis Ford Coppola's Apocalypse Now (1979).

"(...) a clean separation between light and shadow, I was so bowled over by that painting I felt immediately impelled to try to understand and deepen the relationship between these two elements. I had to take my studies to a level that enable me to grasp the intrinsic significance of that representation. (...) without having looked at that painting, I would not have been able to make The Conformist or Apocalypse Now." (4)


For those who wish to watch the full masterclass (about 55 min.), Academia Portuguesa de Cinema made it available here. There's also a transcription of the masterclass: Storaro 2017 Lisbon masterclass.